I need to offer you, Facebook family, un grand merci. You have tolerated (and even “liked”) my 8,000 pictures of the Eiffel Tower. You have even sweetly indulged every wheel of Brie, loaf of baguette, and bottle of Bordeaux that has fascinated me since moving to Paris last year (and it’s not over yet!). But most of all, you have not sent me hate-mail for something called “living my life.” I’m writing to you now because there is a matter that has put a bee in my beret. We have a fairly tight little group of ex-pat Americans here in the City of Light. And I’m sad to say that many of them (if not most) have been downright persecuted by family and so-called friends for moving here (and then posting pictures of their lives here). They’ve been called “selfish” and “insensitive” for daring to move where their bosses asked them to. It just happens to be Paris. Would they be called “selfish” and “insensitive” if they were transferred not to Paris, but to Pittsburgh? I think not. Some of the people I know here actually sought a job in Paris (gasp!). Can you imagine?!! They actually said something like, “Ms. Boss Woman, if ever a job opportunity arose in Paris within our company, I would like to be highly considered for it.” And then, shockingly, they got the job they wanted! Quelle horreur!  I am actually shocked– by my own ability to still be shocked by haters. When people who live in Paris post photos of their cute kids on Spring Break, it is the same thing as your cute kids on Spring Break, just on a different continent. It takes us the same amount of time to get to a beach in say, Spain, as it does for you to go to Myrtle Beach. We can be in London in the same amount of time (and for about the same amount of money) as it takes you to drive to Boone. This is the reality of living in Western Europe. Is it fantastic and amazing? Of course it is– that’s why we all want to share it with people we care about. I just don’t understand the people who are threatened by this (not you guys, beautiful readers!). If gorgeous pics of faraway places are too much to take, that’s what the “scroll down” button is for.  I can’t cook… like, at all. So imagine how distraught and threatened I feel each night when I read Facebook and see everything you all are having for dinner. Perhaps I should fire off a “food-shaming memo” along the lines of this: “Dear Friend and Chef, How can you be so insensitive as to post pictures of your meals day after day? You know I can’t cook. You know I’ll never be able to cook. I will probably not even EAT a meal that looks like that, much less ever cook one. Do you ever think about my feelings when you post these pictures? I know this is your passion and what you’re good at, but you posting all these pictures of your meals is offensive and frankly, smacks of bragging. I think you should strongly reconsider your posts, and from this point on, only post non-offensive things, like photos of clouds.”  It’s ridiculous.  Look, we all post edited versions of our own realities on Facebook. But it’s still reality. I’m no different, so let me be totally honest: Never once (despite your voiced-disbeliefs) have I edited or filtered a shot of the Eiffel Tower! It always looks that good! But you can bet every single picture of me has had the Barbara Walters treatment. The more filters, the better!  The point is, real, everyday reality is kinda boring. Unless it’s funny. So, just so you don’t think life in Paris is all champagne and chocolate, here is a snapshot of 30 minutes in our day today: 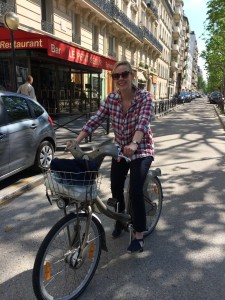 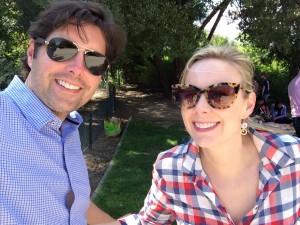 5 pm- Rode our bikes to the Champ de Mars to pick up the kids! Two minutes later, a 6 year old criminal-in-training tried to pickpocket Scott. 🙁

5:15 pm-  A few minutes later, a full-on meltdown, because even though he GOT a dinosaur in his goody bag, it wasn’t the RIGHT dinosaur.